Home » Blog » How to Celebrate Christmas on the Costa del Sol

How to Celebrate Christmas on the Costa del Sol 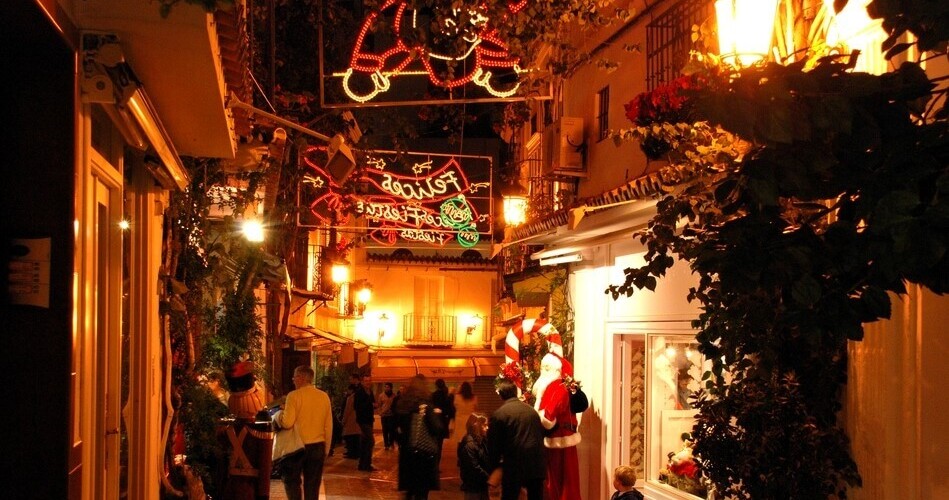 In many ways the Costa del Sol is not much different from other parts of Europe in the lead up to Christmas. Town halls inaugurate dazzling street illuminations, local markets offer an array of gourmet delicacies, restaurants hire Santa Claus stand-ins to beguile young guests, and older revelers unwind at their end-of-year company soirées.

On the Costa, however, in addition there are many other alluring aspects of Christmas that involve typically Spanish celebrations and traditions. Here are some of the main ones to help you get into the right festive mood…

Málaga and Madrid are the only two Spanish cities included in a top 20 ranking of “Best Christmas Lights in Europe” compiled by European Best Destinations. The travel portal notes that Málaga is one of the most trendy travel destinations for Europeans, with the largest number of museums per square kilometer in Europe.

“At Christmas, the palm trees of the city are covered with Christmas garlands. You can enjoy many street concerts and buy original Christmas gifts in the shopping streets or in the different Christmas markets of the city. It is one of the most innovative destinations for Christmas illuminations.”
Málaga’s lights are officially lit on the last Friday of November (the 26th) and remain illuminated until 5 January. One of their special features is that they move in sync with music.

Not to be overshadowed too much by Málaga, back down the coast Fuengirola Town Hall has invested €650,000 to install two million Christmas lights in 100 spaces around the municipality, a sparkling show that will also be inaugurated on 26 November.

Another Christmas attraction rated among the 20 best, and the sunniest, in Europe is Málaga’s “mercado navideño”. Set up beside the sea in the high-end Muelle Uno port area of the capital city, the Christmas market is open throughout December, complemented in the evenings by the light and music show in nearby Calle Larios – Málaga’s vibrant High Street.

Elsewhere, each town on the Costa del Sol holds weekly street markets, and during December they take on a more Christmassy feel as visitors seek special ingredients for their festive dining as well as gifts created by local artisans.

The traditional Spanish Christmas meal with family, and often close friends, is enjoyed on the evening of 24 December. Businesses tend to close early that day to allow managers and staff to make their final preparations for the meal – invariably a grand feast that will last into the early hours of the morning.

Count yourself lucky if, as a foreign resident or visitor, you receive an invitation to a Spanish family’s Christmas Eve dinner. First of all, it is a great honour and second, you will certainly not go hungry and find yourself spending the evening longing for the next day’s roast lunch!
Typical dishes served at a family Christmas Eve dinner on the Costa del Sol include, for aperitifs, Iberian ham and other cured meats, plus olives and a cheese board, followed by a seafood and/or ham-based (with mint) soup, seafood cocktail, freshly cooked prawns, baked fish (sea bream), stuffed squid and slowly cooked pork (“carne mechada”), the latter usually served cold.

Frequently the meal will include all of the above, as well as individual specialties created by the home chef. No half measures here!

Once the savoury dishes have been removed (or transferred to a side table for snacks later on), the main table will be filled up with Christmas desserts including mantecados (light, crumbly biscuits), marzipan (almond-flavoured fondant), pestiños (deep-fried pastry), polvorón (shortbread) and turrón (nougat).

All, of course, accompanied by copious quantities of alcohol… beer, wine and sparkling cava, anise, brandy and sweet Málaga wine, and post-prandial whisky or gin.

With so many Europeans either living on the Costa del Sol or visiting family and friends over the festive period, plenty of local restaurants – including Spanish-run – offer special “international” menus. Including in the days leading up to Christmas…

At this time of the year, the Costa del Sol truly comes into its own as a multicultural hub, with a wonderful potpourri of diverse gastronomy, catering for Scandinavians, Germans, Belgians and their many other European friends and colleagues. Plus, of course, Britons eager to feast on roast turkey with all the traditional trimmings. These cosmopolitan specialities are usually well-advertised on boards outside the establishments, or you could ask the staff at a favourite local bar for recommendations.

Spain doesn’t celebrate a national public (or bank) holiday on 26 December, but with it falling on a Sunday in 2021 many locals are likely to be out lunching with family or friends at one of the Costa del Sol’s chiringuitos (beach restaurants), ventas (countryside inns) or favourite mesóns in town.
And, as the Coast’s famed sun shines throughout winter, this will also be a great opportunity to enjoy outdoor pursuits – whether it be a morning hike in the mountains to build up an appetite or a round of golf after lunch.

This is another occasion to host a family banquet at home but many people – especially foreign residents and visitors – prefer to don evening gowns and suits and reserve a table at one of the Costa del Sol’s top fine dining establishments, such as Puente Romano in Marbella.

Beneath the sophisticated attire, some revelers will be also wearing red-coloured underwear to, ostensibly, usher in love and passion for the new year. Always a great conversation piece wondering what the couple at the next table might have chosen for the occasion!

But we digress… During the evening you will be able to savour exquisite gourmet menus, live music or DJs, other traditional New Year festivities and (if conveniently located) even a fireworks display by the local town hall.

You will also be supplied with a bag of grapes because, at the stroke of midnight, it is time to follow a century-old Spanish tradition by downing all 12 as the chimes strike the hour (either to the sound of the town plaza clock or through the DJ’s mixing console). Legend has it that, if you manage to eat every grape before the 12 chimes end, you will be blessed with good luck and prosperity for the next year.

A useful “trick” to bear in mind: ideally your grapes will already have been peeled (before being packed by the supplier – or superstitiously by you before the countdown), which will make them much easier to swallow in the short time allowed.

Finally, remember that you will usually need to book well in advance (probably early in December) for the more popular venues.

Once again, the most popular chiringuitos, ventas and restaurants will be packed on this public holiday, so lunch should be booked beforehand. Also, it might be advisable after the previous night’s gastronomic excesses to start lunch later than normal (like the Spaniards) and make sure the bar staff can prepare a robust Bloody Mary (or two).

Over the years, Spain has adopted many customs celebrated in other European countries, and elsewhere around the world, including gift-giving on Christmas Day.

Spanish children now “expect” to open at least some of their presents on the 25th, although the main gift-giving day is still Three Kings on 6 January.

The evening before, town centre streets throughout the Costa del Sol are thronged with excited children (and adults) as the kings’ cavalcade passes by and vast quantities of sweets are thrown to youngsters scrambling alongside the flamboyant floats.

(Note: due to COVID concerns and restrictions, some of the festivities were either cancelled or toned down on 5 January 2021, and the same may be the case in 2022.)